Staunton has been very fortunate over the past 40 some years to have individuals dedicated to preserving and revitalizing its historic resources. One of those key individuals was Vic Meinert. While the historic rehabilitation movement had taken hold in Staunton by the 1980s and the City was experiencing investment in both downtown and its surrounding historic neighborhoods, a number of prominent buildings were still waiting on the right person to come along.

Vic became that person and raised the bar on historic preservation with his accurate and beautiful rehabilitations of the landmark Marquis Building at the corner of Beverley and Augusta Streets and the C&O Train Station in Staunton’s Wharf Historic District.

“He was just an incredibly passionate man about historic preservation,” Bill Frazier said. “He was a very hard worker. He was driven to fix up that train station.” Read more about Vic’s rehabilitation and dedication to downtown in this article from the Staunton News Leader, July 3, 2019.

We are thankful for Vic’s passion for Staunton’s historic architecture and offer our sympathies to his family. 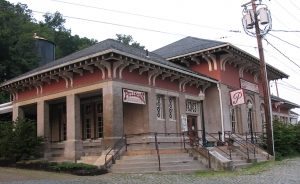 Get In Touch
Newsletter Update

Virginia Main Street: “Invest in a Great Place for Prosperity”
Scroll to top